Shell: “Able are the experts on demolition and dismantling”

Original article can be viewed at the following link: 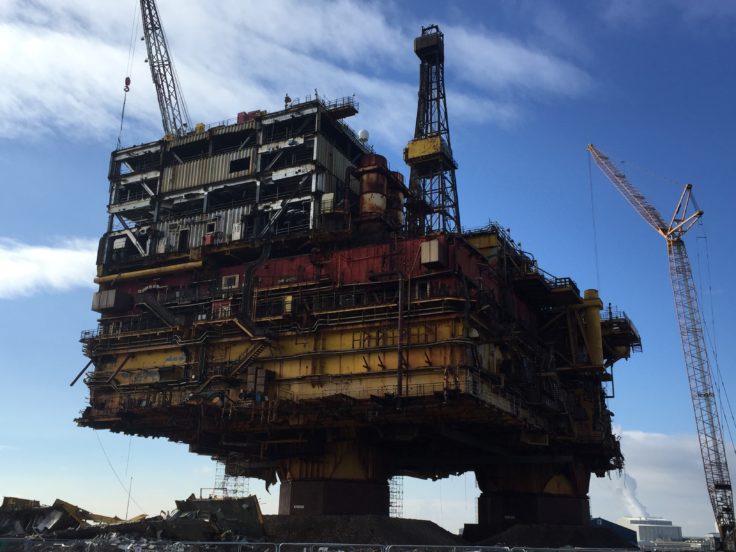 In the year since the Brent Delta platform came ashore for dismantling, its past and present owners have found there isn’t much that can’t be reused or given away.

Bedding to an animal charity, mattresses and furniture to people in need, and emergency Marks and Spencer tinned food supplies to food banks – just about everything is of value to someone.

Pumps are being refurbished and 4,400 tonnes of steel has been cut up into “coupons” ready to be sold.

Able UK is even selling the sand it dug up when it was strengthening the quayside which would receive Brent Delta at its yard in Hartlepool.

Alistair Hope, Brent decommissioning project director at Shell, which owned the platform during its 40-year operational life, said the dismantling process was about 40% complete.

A platform that was three or four decks high has been stripped down.

Most of the accommodation block, the flare stack, and the helideck have all been dismantled.

Mr Hope said Able didn’t have a fixed scheduled, but the process could be sped up if more room is needed on the quay for the Bravo platform’s arrival.

He said Able were experts on demolition and dismantling and had managed to achieve a recycling rate of 98.5% so far.

But there are one or two things that are difficult to reuse.

“The insulation from accommodation module – we have not come up with uses for that, yet,” Mr Hope said.

“But everything has a value. Able are the experts on demolition and dismantling. They are good at deciding what has a future value.”

Shifting the mould-contaminated coffee cups that were left in the galley ahead of the rig’s removal might also prove tricky.

It seems they were given a smooth ride to Teesside aboard Allseas’ huge single-lift vessel, though.

“One thing that amazes me is how the Pioneering Spirit lifted Delta and put it on the quay and the cups were still in the same place where they had been left,” Mr Hope said.

Mr Hope is proud to have been involved in the project.

Open days have been held for people who worked on Delta, allowing fathers to bringing sons and family along.

Schools have brought their pupils for a look at the great, rusting hulk of North Sea history.

Shell knew a lot of people worked on the installation for a big chunk of their careers and had an emotional connection to it.

“We also had a small memorial service for people whose loved ones died on the platform,” Mr Hope said.

“That involved three or four families and the oil and gas chaplain. It helped give them closure after many years.”

Those behind the project want Brent’s impact to be felt long after the last piece of scrap has gone.

Shell has learned a lot from Delta, which was heavily strengthened before it was lifted in one fell swoop by Pioneering Spirit.

The Bravo platform, the next to be removed, will only require a quarter of the strengthening work Delta received, while AEPha will need just a tenth.

Mr Hope said: “Decommissioning is a fantastic place to innovate and try out new techniques. It requires a different mind-set.

“If you approach decommissioning with a mind-set that it is just like production or capital projects, then you are going to get traditional costs and performance.

“But every time we’ve broken that cycle we’ve been able to make step changes in safety and costs.

“Decommissioning is a fantastic playground for that. We have taken several billion pounds out of the costs through learning how to do things better. That’s good for shell and the tax payer.

“It as advantageous for operators to share everything we can.  Hopefully our impact will be bigger than just Brent.”

He added: “Brent Delta is a story about disruptive competition. In 2012, it was a very cosy heavy lift market with only a few players.

“Allseas was disruptive in proving their technology. That triggered traditional players to say, ‘we’ve got competition’.

“They have sharpened their pencils and innovated in doing things better.”