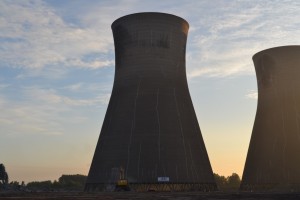 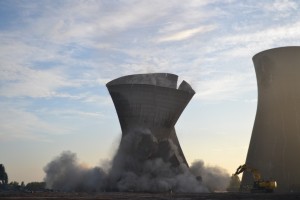 These pictures show the first of the huge cooling towers at a former power station being consigned to history – and most residents slept through it.

While many have expected a massive explosion and plume of dust the reality of the first Thorpe Marsh tower to be razed to the ground was much different.

The first of six towers was brought down using a relatively new wire pull techniques, which meant no explosives were needed.

ABLE UK said the decision to demolish the 100 metre-high landmark was undertaken because of urgent safety considerations. Acorn Power developments is planning a £984 million gas plant on the site.

Andrew Jacques, managing director of ABLE UK said: “we had to take action to bring down this particular tower because of structural concerns and it gave us the opportunity to use the latest demolition techniques which avoid the use of explosives and therefore minimise noise and disturbance in the area.”

“Before the operation we did talk with people in the locality to explain what was happening and we are pleased that it went so successfully.”

A few months ago the peace of Barnby Dub was shattered when a concrete blockhouse on the site was blown up. Parish councillor John Berriman said there was “very little noise” this time around.

He added: “I was in bed and didn’t hear it. When I looked out of the window a bit later I could see a cloud of dust and that was it.”

“It was better than when that was demolished as that disturbed quite a few residents.”

“This time we were given warning but we were asked not to publicise it in order to reduce traffic from people coming to watch.”

The tower came down at dawn on Sunday. Talks will now continue between developers and Doncaster Council about a date for the demolition of the remaining towers.